It's that time of year again - when theatre journalists have long since completed their "best of" lists for the year, when theatre bloggers are putting the finishing touches to theirs, and when I've spent the last week playing with a dressing-up box and a selfie stick to justify not writing very much about mine.

15. Unreachable (Royal Court)
I'm reasonably confident Anthony Neilson must be a terrifying human being, but I haven't laughed at anything else this year like I laughed at this piece of chaos.
14. Wild (Hampstead Theatre)
Miriam Buether is an international treasure. Mike Bartlett ain't too bad either. I found a lot to love about this play, not least the much-hyped set change that somehow managed to fully live up to expectations.
13. Uncle Vanya (Almeida)
My most beloved Chekhov given the full Robert Icke treatment. By which I do of course mean "a far too lengthy running time" but also a set of really great performances from an excellent cast, and actually an overlong running time sort of works for this play.

12. Folk (Watford Palace)
A lot of bad stuff has happened in the year 2016, but it's also the year we got two new Tom Wells plays, so there is that. Like a really good folk song, this play was deceptively simple but extremely good at finding its way inside your heart and stamping on it a little bit.
11. Herons (Lyric Hammersmith)
I think 2017 might end up being the year I finally admit to myself that I rather like Simon Stephens after all, look how he has ended up in my yearly round-up again. Also, special shout-out to Herons for being the first example of my favourite theatrical meme of 2016: performers on stage with visible disabilities without the character they're playing having been explicitly written as disabled (apart from in Unreachable which doesn't strictly count 'cos the character was written for and around and by the performer in question).
10. Yerma (Young Vic)
Future Dame Billie Piper gave an outstandingly good performance in this piece, and actually I quite like the use of a perspex box as a stage, even though some people like to complain about the sound issue and certain artistic directors have done their best to dampen my enthusiasm. If you're not sure, then next time you see a perspex box, put fairy lights in it and see how they twinkle off into infinity. Or put a Simon Stone-directed play in it, that should work too.

9. Cyprus Avenue (Royal Court)
The blackest of black comedies that lured you in with hilarious dialogue before launching into a thoughtful exploration of national identity. And then stunning even the most enthusiastic guffawer into a shocked, nauseated silence.
8. 946 - The Amazing Story of Adolphus Tips (Shakespeare's Globe)
A year is not a year without repeated trips to the Globe, and the very best of the good work done this season is this charming production directed by the IMMENSELY-UNFAIRLY-SOON-TO-BE-FORMER artistic director Emma Rice. (Frankly I should have known how much I would end up loving it as soon as someone mentioned it would involve a cat and swing-dancing.)
Special guest: Handsomest Cat.

7. Henry V (Open Air Theatre)
GIVE ME WOMEN PLAYING OUR GREATEST WARRIORS OR GIVE ME DEATH. Bless you, Robert Hastie, for not only understanding what I love so much about Henry V, but also for getting Future Dame Michelle Terry to perform it.

6. The Grinning Man (Bristol Old Vic)
A musical based on a Victor Hugo novel? It'll never catch on. Except I do hope this one comes back to life somewhere, it was so beautiful and charming, the perfect dark fairy tale filled with laughter and tears and the most amazing wolf puppet.
5. Sleep No More (McKittrick Hotel)
Oh hell I'm just a long-term sucker for a Punchdrunk show and if they're not going to give me a new show in London then I'm just going to fly all the way to New York to see Hamilton and book several trips to Sleep No More while I'm at it. I've always been very grateful for any time I've spent lost inside these dreams.
4. Hamilton (Richard Rodgers Theatre)
I JUST HAVE A LOT OF FEELINGS ABOUT ELIZA HAMILTON, OKAY? YOU'LL FIND OUT FOR YOURSELF IN THE AUTUMN IF YOU HAVEN'T ALREADY. 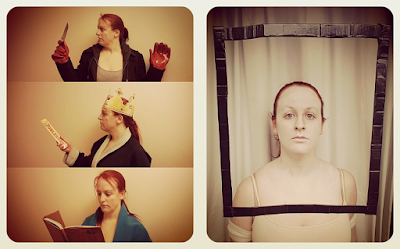 3. Donmar Shakespeare Trilogy (King's Cross Theatre)
It has been a TERRIFIC year for women playing male roles in Shakespeare. Although two of these plays were not technically from this year, I found they improved immeasurably for me by being presented in the context of the trilogy. Having previously found the prison setting a slightly irritating gimmick, I was now more able to see the work that had gone into the concept, and was thoroughly impressed and moved by all three plays, individually but especially together.
2. YOUARENOWHERE (Shoreditch Town Hall)
Once you've developed a theatre habit, theatre starts to lose the power to surprise you. The stories themselves will have their unexpected turns, sure, but it's easy to assume fluency in theatrical languages. All the more precious, then, these rare and unforgettable experiences that completely subvert your ideas of what constitutes theatre, or art, or even reality itself. 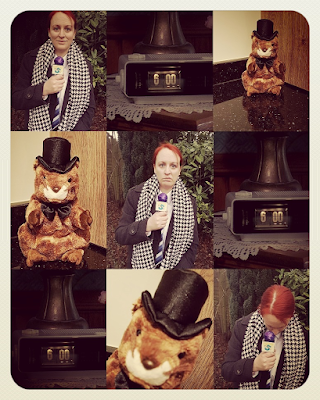 1. Groundhog Day (Old Vic)
Having never seen the film, I wasn't entirely sure what to expect apart from a necessarily-repetitive story. I was thoroughly delighted to discover an intelligent and witty score performed by a brilliant cast, a production to die for, and a story that was surprisingly moving given its slight nature. Some people didn't really fall for this show; I was one of those who fell head over heels, and I only regret that I didn't see it more. BRING ME A CAST RECORDING SOON (and don't do too many rewrites).

Hero of the year
In a year which has seen both playwrights and directors alike continue to push the furthest limits of running times to three hours and beyond, it has fallen to our greatest living playwright to write provocative, challenging, thought-provoking plays that regularly come in under an hour, and are often even shorter. Hats off to you, Caryl Churchill! Long may you keep playing with theatrical form while simultaneously letting us catch the early train home!

Stinker of the year
Miss Atomic Bomb (St James Theatre)
Not only was this show poor, it was actually offensively poor. I am very pleased that so many of the talented cast have moved on to better roles, a) because they deserve to, and b) because it would be extremely difficult to move on to worse roles. I very much hope that The Other Palace proves a more successful venture for new musicals than the St James Theatre was with this (though I will forever and ever and ever shout about how 'The Other Palace' is a really dumb name for a theatre).

Thanks as ever to my family of enablers, and if you want to see any of the pictures better, they have all been heavily filtered courtesy of my Instagram. See you in 2017!