List the last 10 things you saw at the theatre in order:
1. The Busy World is Hushed (Finborough)
2. Saint George and the Dragon (National; Olivier)
3. Ramona Tells Jim (Bush)

Who was the best performer in number one (The Busy World is Hushed)?
Um, probably Michael James.

Why did you go to see number two (Saint George and the Dragon)? 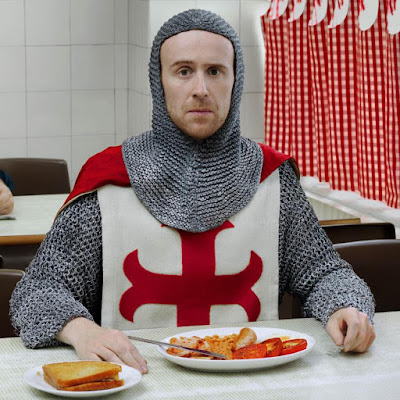 Can you remember a line/lyric from number three (Ramona Tells Jim) that you liked?
No. I remember very vivid feelings but not individual bits of dialogue.

What would you give number four (Round and Round the Garden) out of ten?
8, I think. It was certainly my favourite of the three. Apparently I just really enjoy watching John Hollingworth in ludicrous shorts, so the more of that there is in a play, the better.

Was there someone hot in number five (Living Together)?
It's extremely difficult for people to overcome '70s styles and '70s attitudes as presented by Alan Ayckbourn to present attractiveness, but Hattie Ladbury did quite well out of it.

What was number six (Table Manners) about?
Honestly I had such an early start and such a fraught journey that it's probably best not to ask me about anything that happened before lunchtime. I can reveal the title is a fairly ironic one though.

Who was your favourite actor in number seven (After the Rehearsal/Persona)?
Probably Gijs Scholten van Aschat, and not just because his is the only name I've learned to spell.

What was your favourite bit in number eight (Boudica)?
I'm a sucker for any battle scene that involves a zip wire.

Would you see number nine (My Name is Rachel Corrie) again?
No. Great production, worth ticking off the list, but no need to revisit.

What was the worst thing about number ten (Legally Blonde)?
I guess Bill Ward is reasonably famous? I could have done without the entire audience doing the collective "ohhh!" of recognition Every Single Time he walked onto the stage. And I wouldn't have minded the cartoonishness being toned down a little, but that's as much a writing issue as a directorial one.

Which was best?
Probably My Name is Rachel Corrie.

Did any make you cry?
Not that I recall.

Did any make you laugh?
I laughed my ass off at Saint George and the Dragon. The Ayckbourn trilogy managed to sucker me in as well.

Which roles would you like to play in any of them?
None, thanks.

Which one did you have best seats for?
The Busy World is Hushed, Ramona Tells Jim, My Name is Rachel Corrie, and Legally Blonde. I also had excellent seats for Saint George and the Dragon and particularly Living Together but also Table Manners and Round and Round the Garden.
Posted by Weez at 11:13