THEATRES: TALK TO EACH OTHER

Historically, June has been my most financially ruinous month. It sees the birthdays of both of my parents, Father's Day, and extensive outdoor amdram which leads to a LOT of takeaway food and emergency runs to Sainsbury's for safety pins and false eyelashes. So if you think about it, it's actually almost kind of the theatre world to come together to ensure that July 2017 is far worse for my finances than June 2017 could ever DREAM of being. Not too squeamish to talk money? Click the "Read more >>" and let's itemise this nonsense. Please note: I work hard to keep my costs down by booking the cheapest tickets, but even that wasn't enough to keep me from feeling physically sick before I'd even got halfway through this post.


The First Problem is the National Theatre. After their booking systems had a nervous breakdown, they finally committed to putting tickets on sale on 12th July for Amex cardholders and 14th July for the public. I initially signed up for an Amex card because I was reluctant to pay any sort of membership fee but still wanted to be in good stead for Angels in America tickets, so I was all set for the 12th. However the Amex doesn't necessarily get you access to the cheap tickets at the front, so I had to be all set for the 14th as well.

I'm REALLY excited about Saint George and the Dragon so decided to book two performances, while I'm much less sold on Beginning so figured I'd only book it if I could get something reasonably priced in a reasonable place in the auditorium. Right off bat, the cheapest tickets were £25 and all up on the side of the gallery, so the best thing that's happened to me this month is that I was instantly able to write off this one play. (I hate the Dorfman and I miss the Cottesloe.) For the other plays, I decided to book the best seats I could find for the lowest cost on Amex booking day, rationalising that it would be easy enough to return them for credit if I got something better on public booking day, and if I didn't manage to upgrade them, at least I'd still be through the door.

Not too bad. I managed row A for Pinocchio so made a note to come back on Friday for the other two and to check out the Follies situation.

The Second Problem is the Bush Theatre. I don't go to the Bush half as much as I'd like to, and I wasn't expecting to find anything in the new season that was announced on 12th July but I had a look anyway, and slightly to my dismay found myself unable to resist the Sophie Wu or Thomas Eccleshare plays.

The Third Problem is the Chichester Festival Theatre. I was vaguely interested in The Norman Conquests but not interested enough to have booked already. At some point on 12th July, I became aware that the cast was now in place, and what a tremendous sextet! I feel very personally attacked by whoever decided to put Trystan Gravelle and John Hollingworth in the same cast; I could maybe have resisted one of them, but not the two together, and the other four are nothing to sneeze at either. Having filled all my Saturdays until the end of the year, I quickly established which weekdays were also trilogy days, arranged the necessary time off work, and booked the three. I was a bit limited in seat choice for the day I chose (side note: anyone else there on press day, want to go for a Wahaca?) so had to splash out a little for Living Together, but it was only £2 more expensive in total than going for a different day so I stuck with it.

The Fourth Problem is the Royal Court. I've been trying to cut back on visiting the Upstairs auditorium, as my fellow audience members are stressfully bad at queuing nicely and since the price went up it's not worth the hassle. However I'm willing to make the exception for anything that sounds great, and I ended up booking more of the season on 13th July than I'd initially planned to. I'm just relieved to have discovered which of the cheapest Downstairs seats count as proper bargains.

(I decided not to book Bad Roads because it's Upstairs and just didn't intrigue enough, or Goats because I just don't know how interesting it sounds but frankly I still might book it, or Black Men Walking because it does sound great but it's not opening until March so it can definitely wait a month or two before I completely decide. So that's roughly £60 saved.)

The Fifth Problem is the Lyric Hammersmith. I wish all my problems were Lyric Hammersmith sized. I've been reading about Fatherland, I'm very excited about it, and they released tickets on 13th July. Yeah, I guess I could've held off, but I didn't want to, so I didn't.

And then we return to The First Problem, the National Theatre. Admittedly things didn't have to be this bad - no one forced me to book four Saint George and the Dragon tickets for two trips, or two Network tickets for one trip, and I did at least have £26 in credit from when I needed to rearrange my life and decided I could do without Common or Salomé, but nonetheless, I could've done without all the additional expense of 14th July. Still, at least I now have fantastic stalls seats for Saint George and the Dragon, Follies, and Network, and at least I'm not going to completely forget about the quiz this year.

(Then, because I got through the queue really quickly and because I'm a good friend, we could but won't add another £30 to the running total for helping a buddy out with George and Follies tickets. That bit on the NT site that shows all My Forthcoming Events is looking a bit specific right now though...) 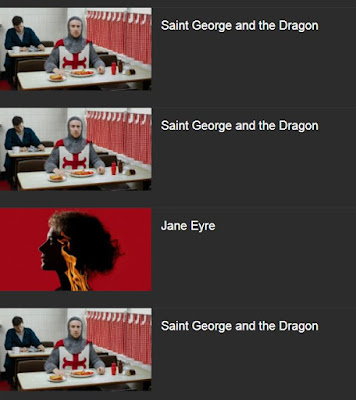 FROM HERE ON, THE TICKETS HAVE YET TO ACTUALLY GO ON SALE, SO THE RUNNING TOTAL BECOMES A BIT HYPOTHETICAL.

The Sixth Problem hasn't happened yet but is coming on Wednesday 19th July - the Old Vic. Yes, an Alan Ayckbourn double-bill sounds like a special sort of a nightmare, but my Chichester booking no longer leaves me a leg to stand on, and I do love a good dystopia, so heaven help me I will be booking both parts of The Divide. Tickets for the two-show days run from £30 to £80, and I will NOT be paying the latter. Let's assume I'm fortunate enough to get one of my preferred cheap seats.

The Seventh Problem is also forthcoming - the Young Vic. The Young Vic, like the Royal Court, is exceptionally beloved of me for programming things that sound brilliant but also programming things that sound like I can probably skip them without worrying about missing out. The amount I've spent so far this month, it's extremely valuable to remember that "no thank you, this is not for me" is a valid option. However, that said, all five shows announced on 14th July sound tremendous and I will book them all on Friday 21st July, even though I don't technically have time for My Name is Rachel Corrie and The Inheritance is a double-bill.

Even if I hadn't decided to book three NT tickets twice each, we'd still be looking at £350 worth of tickets within ten days of each other. Perhaps I should have booked my Chichester tickets sooner. Perhaps I could have held off on Fatherland. OR PERHAPS - PERHAPS - PERHAPS - THEATRES COULD REALISE THAT LOYAL AUDIENCE MEMBERS ARE NOT BOTTOMLESS MONEY PITS AND COULD CO-ORDINATE WITH EACH OTHER TO ENSURE THAT OUR BANK ACCOUNTS GET A LITTLE RESPITE NOW AND THEN.

Is it any wonder that the Almeida's sweet little "on Monday at 10am we’ll be announcing our Autumn/Winter 2017/18 season" tweet was roundly met with cries of "OH GOD NOT ANOTHER ONE" (in my circle at least)? At least as a non-member I should have a week or two to lick my wounds, but with priority booking kicking off on 21st July, odds are extremely good that public booking will open before the end of the month, thus ensuring that the Almeida becomes The Eighth Problem (hopefully at the cost of £10 per play if you're wondering what their announcement will do to my running total). Public booking for the new Almeida season is Thursday 27th July and I am extremely keen to book all three productions, so we can chuck an easy £30 on top of the running total here. Thanks, guys! You are officially The Eighth Problem!

EDIT: Monday 31st July. The Other Palace. Big Fish. £32.00. The Ninth Problem. Rapidly approaching £500 in total ticket spend for the month. Thank all that is holy that I no longer toil in retail.

The cost of individual theatre tickets is not the problem, guys. The cost of paying for all the theatre tickets at once is going to be what eventually scares away your core audience. Please just talk to each other.
Posted by Weez at 17:08