Who was the best performer in number one (Goats)?
This one: 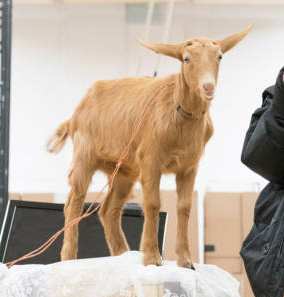 Why did you go to see number two (Labour of Love)?

I believe I have stated before, and it still holds true, that I'll see pretty much anything for £10.

Can you remember a line/lyric from number three (The Suppliant Women) that you liked?
Although there were a lot of lines to be remembered and treasured, I have picked out "we will fight you, men of shit" as being not only memorable but also a pretty neat summary of the current international mood.

What would you give number four (Our House) out of ten?
Ooh, tricky. I think we're looking at 9 for the choreography, but maybe a 6 or something for the writing. I enjoyed it while I was watching it, but I have numerous questions about and issues with the writing. 7 overall?

Was there someone hot in number five (Albion)?
Not on stage. Not actually in the play. Not comparative to others also working in the building.

What was number six (Coriolanus) about?
It was about half an hour longer than it was due to be, thanks to a set malfunction, and about an hour longer than it should have been, thanks to the RSC's continued insistence that all Shakespeare plays must run for a minimum of three hours (preferably not including the interval). Other than that, there was a lot of blood, homo-eroticism, and talk about dogs.

Who was your favourite actor in number seven (Drip)?
Andrew Finnigan. This question is unfair, as it was a one-man show, and I want to be able to praise him for being great, not for being the only cast member.

What was your favourite bit in number eight (Minefield)?
I didn't have a favourite bit. This question is really annoying sometimes.

What was the worst thing about number ten (Beginning)?
I hate the Dorfman, it's a terrible theatre. The play also wasn't as devastatingly brilliant as I'd been informed, but maybe I'd have been a lot more forgiving if it had been in a better theatre.

Which was best?
Um... The Suppliant Women and Drip.

Did any make you cry?
Not this time.

Did any make you laugh?
Labour of Love and Drip.

Which roles would you like to play in any of them?
Oh to have been a part of The Suppliant Women as my brilliant friend was, and shame on certain men being apparently unable to create art without also creating difficult situations for others.

Which one did you have best seats for?
Goats, The Suppliant Woman, Our House, Coriolanus, and Drip. I also had a jolly good seat upgrade for Venus in Fur, which was a relief as I had originally booked gallery.
Posted by Weez at 11:52